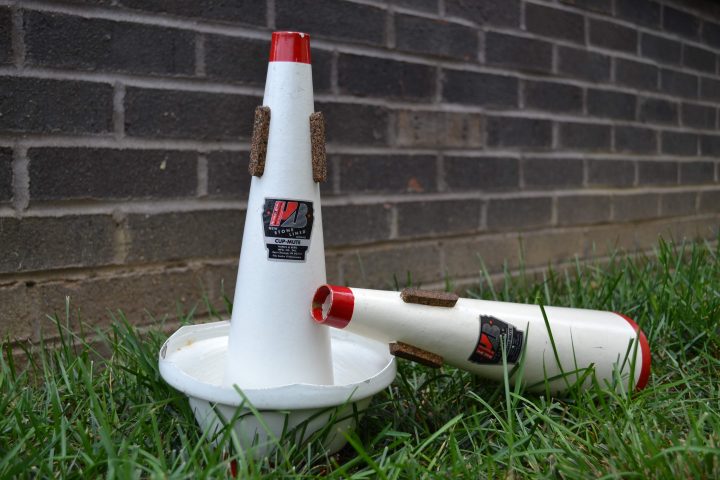 At some point in your trombone journey, you’re going to stumble upon a line in your music that reads “mute.” Chances are, your instructor told you to stick your horn in the stand or cover the bell to get a muting effect. However, at some point, you’re going to want to invest in the real thing. Fortunately, in this article, we’ll answer a tone of questions about mutes including:

As always, these types of articles are meant to provide an overview of the topic. If you want more details about any of the questions in particular, feel free to follow the links provided in those sections.

What Is a Trombone Mute?

Quick answer: it’s a piece of material that goes in, on, or around the trombone bell to alter the tone of the instrument.

More specifically, a mute is a device that you attach to your bell to change how the trombone sounds. Typically, you would own a few different mutes for different occasions. For example, it’s not uncommon for a straight mute to show up in concert band music. Likewise, you’ve probably scene a plunger used once or twice in jazz music. Take a look:

Unfortunately, due to the sheer variety of trombone mutes out there, it’s tough to describe exactly what they are. That said, like most things in music, I find it helpful to just take a listen:

How Many Types of Trombone Mutes Are There?

Quick answer: a lot, but not all of them are practical.

By this point, you’ve probably had a chance to see the various types of mutes there are for trombone, which begs the question: how many types of mutes are there?

This question can be broken up into two parts. First, I would argue there are only a handful of general purpose mutes that you’ll want to have on hand. In my experience, that includes a straight mute and a cup mute. And even then, I’ve gotten away with using a music stand to literally mute the sound of my horn.

That said, there are many, many types of mutes. But outside of the straight and cup, there are only a handful of other mutes that you might be exposed to regularly. These include the plunger and bucket mutes. If you peak at the thumbnail above, there are also several other mutes including pixie, harmon, softone, and buzz. These are significantly more rare.

However, it really depends on the context. As a jazz musician, I might see plungers more regularly than an orchestral musician. Similarly, folks who play in pit orchestras for musicals probably see the widest variety of mutes for various effects.

If you’re interested in seeing what the most common mutes look like, check out my article on the 5 most common trombone mutes.

How Do I Get a Trombone Mute?

Quick answer: head to your local music store, make an online purchase, or hunt for a deal on Craigslist.

Now that you’ve seen some mutes, let’s talk about how to get one. In general, there are two main ways to get a mute: online or in-person at a music store.

Unlike trombones, mutes are significantly more affordable. As a result, you’re less likely going to want to try-before-you-buy. That said, if you decide to purchase a mute online, I recommend reading a lot of reviews:

Worst case scenario: you send it back and buy a different one. If you’re looking to save some money, I’m sure there are folks willing to part with their used mutes on eBay and Craigslist. And since mutes are so rarely used, this might be a good option.

In my case, I don’t think I started buying mutes until high school or even college. In fact, according to Amazon, I last purchased a mute in 2013. At that point, I was using straight and cup mutes more regularly in concert band, and if I ever needed something else, I was usually able to borrow one. And since I used the mutes so infrequently, I went sort of cheap with the old reliable Humes & Berg brand.

If online shopping isn’t your thing, you can always try to find mutes at your local music store. I believe I’ve seen then at larger chains like Guitar Center. Alternatively, if you’re in an ensemble, you can try to see if they have mutes that you can borrow.

All that said, be very careful when you pick out a mute. Trombones aren’t the only instruments that support mutes. For instance, you can buy straight mutes for all sorts of brass instruments including trumpets, French horns, and euphoniums.

How Much Does a Trombone Mute Cost?

Quick answer: trombone mutes are relatively inexpensive with prices ranging from $10 to $100, depending on brand and materials.

Now that you know where to look for a mute, it’s time to talk about how much you’ll be spending. If you’re like me and don’t mind being a little cheap, you can pick up a stonelined mute, which is effectively a very durable cardboard, for around $20. Alternatively, I’ve seen some plastic varieties for around the same price, though I cannot really comment on their quality or tone.

If you want something that is a bit more professional, you’ll have to shell out a little bit more cash. For instance, I’ve seen some nice aluminum mutes in the $30 to $50 range.

As always, the type of mute also impacts the cost. For instance, straight mutes seem to be the most affordable which I’ve seen as low as $10. In fact, I’ve written a nice list of straight mutes, if you’re in the market for one.

Alternatively, cup mutes seem to be about twice the price on average (i.e, $50 – $100), though this makes sense considering they require a bit more material. Likewise, I’ve often seen cup mutes feature removable cups (i.e., a 2-in-1 cup and straight mute). However, those can be a bit annoying to use if you have to switch back and forth often.

Some of the more rare mutes seem to be quite affordable as well. For example, the Harmon mute has a comparable cost to a cup mute. I suspect this is due to the lack of demand, but who knows.

All that said, I am sure there are professional mutes made of fancy materials like rose gold which skyrocket the price. That said, for everyday use, you can get a mute for a very affordable price. That said, be careful not to buy too many. They’re somewhat difficult to store.

How Do I Learn How to Use a Trombone Mute?

Quick answer: pick up a songbook, join a community band, find a private instructor, or watch some YouTube videos.

In my experience, there is not much you need to learn to be able to use a mute, though most of my experience is with cup and straight mutes. In general, those just twist right into the bell. From there, it’s a matter of practicing to get the right tone.

For some of the more intricate mutes like the plunger and Harmon mutes, there are definitely techniques that go beyond blowing into the horn. For instance, here are some techniques for learning how to use a plunger mute:

All that said, mutes typically require context to be effective, so you’ll want to grab some sheet music that includes muted parts. Or, you can always listen to you favorite musician and try to mock their sound.

Ultimately, the best way to learn is with others, so you’ll either want to pick up an instructor or join a community band. That’ll help you get up to speed quickly!

If you came here because you knew nothing about mutes, now you have plenty of knowledge to get started. As always, thanks for taking the time to check out the site. As always, respect the brass!