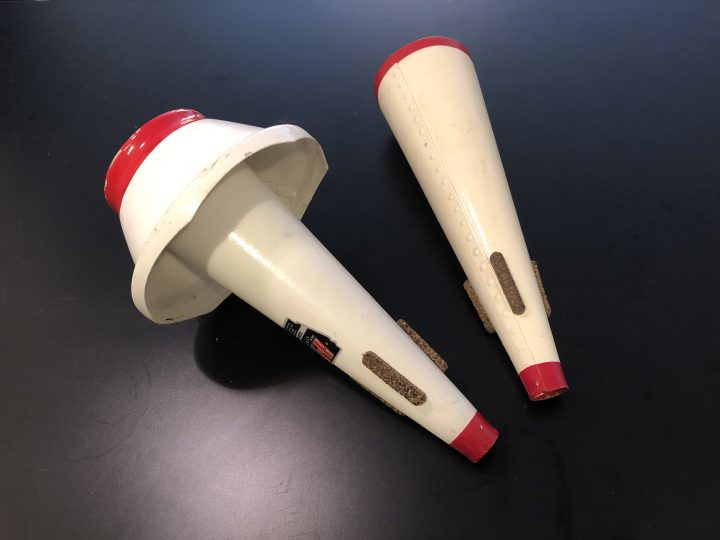 In the world of music, having an instrument alone sometimes isn’t enough. In addition to accessories like oil, gloves, and cleaning kits, it’s important for every brass musician to have a set of mutes. In this article, we’ll cover the five main trombone mutes with some pictures.

Without further ado, here’s the list of trombone mutes:

In the following subsections, we’ll take a look at each mute, what it sounds like, and how it’s notated in music.

As the name suggests, a plunger mute is just that: a plunger. Of course, you can buy a plunger mute, but a regular plunger works fine—just don’t forget to remove the handle!

Of all the trombone mutes, the plunger is the only one that doesn’t attach to the bell. Instead, you hold it directly to the bell with the hand that doesn’t operate the slide. Then, you use your hand to move the plunger toward and away from the bell as notated in your music (+ and o, respectively).

In terms of sound, check out this video by Sergeant First Class Jeff Adams:

As you’ll hear, the plunger has a nice effect when it is moved to and from the bell.

Following the plunger mute, we have the straight mute which is usually cone shaped and slides directly into the bell. To hold it in place, there are a few slices of cork—file down as necessary.

Of all the trombone mutes, the straight mute is a must-have. It’s used range the full spectrum of musical styles, so you really can’t go wrong with owning one.

In terms of notation, “straight mute” is usually marked in plain English when you are supposed to put the mute in. When it’s time to take the mute out, you’ll see the phrase “open”.

Like the straight mute, the cup mute also slides right into the bell. However, the design is slightly different. In particular, they have more of an umbrella-like structure which extends over the bell.

Also like the straight mute, the cup mute is very popular. In fact, those are the only two trombone mutes I own, and I’ve even seen combo mutes where the cup can be taken off.

Naturally, cup mutes are notated in plain English much like straight mutes. When the arranger wants you to remove the mute, they’ll let you know with the “open” cue.

Now, let’s listen to how it sounds:

With the additional of the cup, the tone tends to get quite a bit more muffled.

Unlike the previous two mutes, the bucket mute doesn’t typically slide into the bell—though I’ve seen some models that do. Instead, they clip around the end of the bell. Inside, you’ll often find some mesh or foam to dampen the sound.

Unfortunately, I haven’t used a bucket mute, so I can’t speak to its notation. In fact, a lot of my Google searches came up empty, so if you any samples, send them along! I’d appreciate it.

At any rate, let’s take a listen:

In this video, they demonstrate the straight mute style of bucket mute I mentioned before, but you get the idea.

Of all the mutes in this list, the Harmon mute is probably the least useful for a trombonist. That said, I decided not to leave it out because it’s still worth knowing about. After all, it has moving parts! In particular, the Harmon mute has a stem which can be moved in and out of the mute.

In addition, the Harmon (aka wah-wah) mute features a complete cone of cork which blocks air from exiting around the mute. In other words, all air travels directly into the mute.

Again, I haven’t personally seen a Harmon mute used in trombone music, so I can’t speak to the notation. That said, I would assume the notation would look similar to everything we’ve seen already with some added directives related to the stem.

At any rate, let’s have a listen (video is in Italian):

Honestly, I really like the sound—especially without the stem. It’s sad these mutes aren’t more common.

As a trombonist, you’re almost certain to run into straight mutes and cup mutes in music. And if you play in pit orchestras or jazz bands, you’ll probably even run into plunger mutes. Beyond that, I wouldn’t expect you to need a bucket or Harmon mute. That said, there even more mutes:

Of course, like the Harmon mute, many of these border on the obscure. If you know of any songs where some of these are featured, let me know!

While you’re here, perhaps you’re looking for a laugh or trying to find a budget horn. Either way, I’d appreciate it if you took a look around the site. Your feedback is always welcome.

As always, thanks for your time, and always respect the brass!