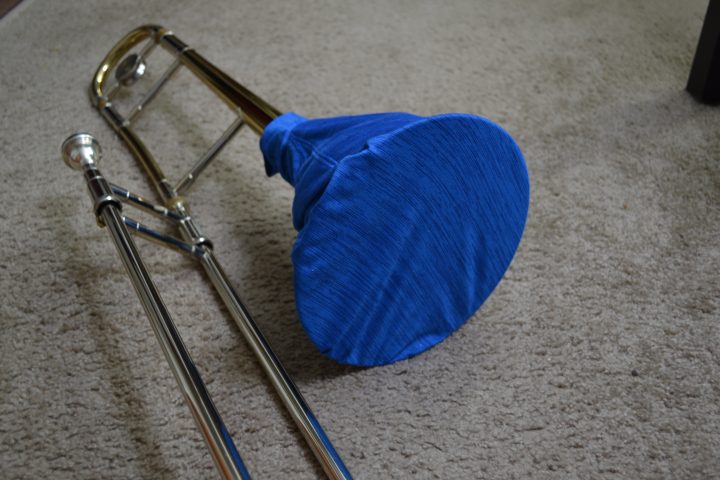 COVID-19 brought a lot of changes to our lives. Over the past year, we’ve grown accustomed to those changes which has included mask wearing and social distancing. Of course, you can’t wear a regular mask and play a brass instrument, so the next best thing is to invest in a bell cover—or bust out an old t-shirt. Luckily, I’ve put together a list of the five trombone bell covers just for you!

In short, all the brands you come to expect in music seem to be missing out on the bell cover craze. Though, it seems KYT Music and Protec have you covered. That said, don’t overlook what other brands like Carbinahome, Bestim Incuk, and ArtJ4U have to offer. Ultimately, whatever choice you make, you won’t be breaking the bank.

If I’m going to be honest with you, my local community band has been on hiatus since the start of the pandemic. As a result, I’ve had no need for a bell cover. That said, I know other folks do, so I figured I’d simplify the search process for you all.

When I research the best products, I like to leverage the various filtering features of Amazon to limit my search. For instance, I used the following settings to generate this list of the best tenor trombone bell covers:

As always, I make sure to sort the products by average customer review, so I know I’m getting the best product first.

In this list, we’ll take a look at the five best tenor trombone bell covers that I could find on Amazon. Feel free to share your favorites as well.

Coming in at number one on the list is a very affordable bell cover by KYT Music. According to their product page, this bell cover is 8 inches in diameter, so it should fit snuggly on most tenor trombones. In addition, it’s washable, so you can use it again and again.

Like most bell covers, this one is made of an elastic material, so it should form to the shape of your bell. As an added bonus, the material is double layered and includes a pocket for removable air filters.

All-in-all, this looks like a pretty good bell cover that even promises to limit effects on tone. Likewise, folks seem to be quite pleased with it. Though, there were a few complaints of it not meeting the strictest of safety requirements. As a result, it may be a good idea to use this bell cover in addition to a musicians mask.

If you’re not a fan of the KYT Music bell cover for whatever reason, Protec makes one that is almost identical. Much like the other bell cover, this one features two layers of fabric which is washable. Likewise, it’s also elastic, so it should fit over a variety of bell sizes.

As far as I can tell, the only difference between Protec’s bell cover and KYT Music’s bell cover is the lack of a pocket for a filter. To me, that seems like a major downgrade. That said, if you don’t need the pocket, then this bell cover will work just fine.

Overall, folks seem to really like Protec’s bell cover. The only complaint I could find was the effect the bell cover has on pitch. In my experience, just about everything from mutes to ambient temperature effects the pitch of a trombone, so I see this as less of a con than a fact about the reality of being a musician. I’d recommend tuning your horn with the cover on.

Yet another cover in the long list of bell covers comes from Carbinhome. I’ve personally never heard of this brand, but the bell cover seems to be fairly popular.

Of course, like the previous bell covers, this one seems to have all the same features. Specifically, it’s made of an elastic felt, so it’ll stretch over a variety of bell sizes. Likewise, it’s also double layered like the previous two bell covers. In addition, it’s washable, so you can reuse it.

Like Protec’s bell cover, this one seems to lack a pocket for a filter. Again, this would be a major con for me, but you may not care. Given how affordable all of these bell covers are, you wouldn’t be losing any money by going for filter support. That said, it’s totally up to you!

Unlike the previous bell covers, I couldn’t find any negative comments about this one. Though, this manufacturer does sell several variants, so you have to make sure you get the right size (~7-9″ for a tenor trombone). I will say that this cover looks a bit more soft than some of the previous covers, so I would probably pick this one to avoid the possibility of scratches on the bell. That said, I haven’t seen anyway complain about that, but it’s definitely worth considering.

Up next, we have another brand that I’ve never heard of: Bestim Incuk. My first impressions of this bell cover just from the pictures is that it’s sort of ugly. Unlike the previous bell covers that seem to be completely elastic, this looks like a pair of sweatpants on your bell.

That said, I won’t knock this bell cover as it appears to hit all the same boxes as the other bell covers. It’s washable and reusable and doesn’t effect tone according to the manufacturer.

Like the previous bell cover, you can run into some trouble if you’re not careful. It seems these manufacturers group all of the bell covers under one listing, so it’s easy to buy the wrong size. Also, it seems to be lacking a pocket for a filter, but that seems to be expected at this point.

Last but not least, we have the Bell Cover from ArtJ4U. Up to this point, just about every bell cover has been the same. This one, however, is a bit different.

First, it’s silver! Or at the very least, they offer both silver and black. In addition, it’s the first bell cover we’ve seen in this list that’s not elastic. Instead, the mechanism they use for wrapping the fabric around the bell is a drawstring. I’m not sure why it includes a drawstring given that the entire thing is supposedly elastic, but I guess that gives you more peace of mind as it loses elasticity over time. That said, if there are any dangling plastic parts, I worry they might damage the horn.

Overall, folks seem pleased with this bell cover, and one person even said they used it in conjunction with a foam ball to make their own mute. I don’t know much about making mutes, but you can find all the information you might want to know about trombone mutes here.

As it turns out, it seems bell covers are all more or less the same. If you’re particularly picky about them, you can keep an eye out for filter pockets and drawstrings. That said, I don’t think you can go wrong with any of the bell covers in this list.

As always, if you find a bell cover you really like and would like me to recommend, feel free to reach out. Otherwise, take care, and remember to always respect the brass.