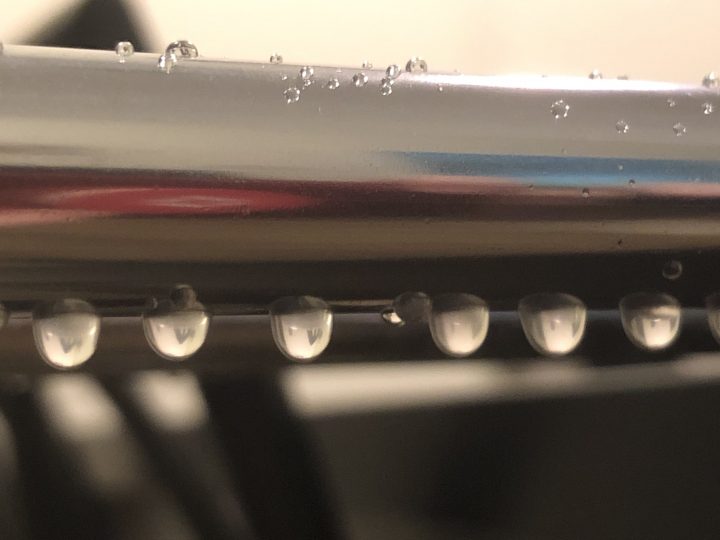 As I was putting together my article on slide lubricants, I noticed a lot of experts mentioned spraying their slides with water, but none of them mentioned why. Naturally, my curiosity got the best of me, so I decided to figure why musicians spray trombone slides with water.

In short, it’s unclear exactly why trombone players spray their slides, but my best guess is that the water droplets act as mini ball bearings to limit friction between the inner and outer slide. In the rest of this article, I discuss exactly how I came to that conclusion.

The (Speculative) Science Behind Spraying Trombone Slides With Water

Before I listened to the experts, I decided to look into the scientific relationship between oil and water. After all, I think most of us know that water and oil don’t mix. How can that relationship be useful for trombone slides?

When you apply oil to a slide, it creates a layer between the inner slide and the outer slide which reduces friction. To me, that should be enough to start playing.

Of course, some people go the extra mile and spray water on their slide after they apply the oil. Since there’s already oil on the slide, the water creates an additional layer between the two slides.

To me, that shouldn’t make much of a difference. However, something interesting happens when you spray your slide with water: the water beads up. Beading occurs because water molecules are polarized and are therefore attracted to themselves. This phenomenon is known as surface tension.

Of course, water doesn’t always bead up. For example, when it hits your shirt, the shirt soaks it up. So, what makes this scenario different? Well, the water is sitting on the oil.

As it turns out, oil is hydrophobic which means that it’s not attracted to water. As a result, when the two liquids come in contact, they stay separated. Since the oil is hydrophobic, the water attracts itself into a ball-like shape. That leads me to think that the water acts like miniature ball bearings between the inner and outer slide.

Now, I would imagine that water would mostly work on its own. After all, we slip on it all the time, and it’s not like the metal is going to soak it up, right? Then, I realized that water evaporates, so it makes a pretty bad lubricant. In other words, who would want to bother with applying it multiple times a day? That’s what makes oil the better choice.

What the Community Says About Spraying Trombone Slides With Water

If you straight up search “why do musicians spray their trombone slides with water?”, you’re bound to find nothing. At least, that was my experience. To answer that question, I found myself digging through slide oil guides and videos to see if anyone would mention the reason behind using water. In most cases, I found nothing, but occasionally, I’d strike gold.

For instance, when I searched “how to oil trombone slide,” I found an article titled How to Lubricate Trombone Slides by Matt Kerns. In it, Matt explained how to apply slide cream to a trombone. In the last step, he mentions the following:

At this point, the slide should feel fairly smooth, but for the best action use a spray bottle to apply a fine mist of water onto the inner slide tubes before and as needed while playing. The water will bead against the greasy layer of cream and act like tiny ball bearings to cushion the slide and make the action super-fast.

In very few words, it seems Matt has come to a pretty similar conclusion as myself as to why we spray trombone slides with water. Of course, I wanted to know more.

Somewhere in my search I stumbled upon an article titled Trombone Care and Maintenance on the Zachary Music website. In that article, the author talks about the various methods for lubricating a slide. For example, they mention slide cream as the best option, but it has to be used with a water sprayer because:

It is the water that activates the cream and makes it slippery for a great slide action.

Oddly enough, this reference to activation is something I had read a few times in product reviews, but I’m not sure how valid it is. At any rate, my search continued.

Eventually, I stumbled upon an article titled A Short Guide to Trombone Slide Cleaning and Maintenance by Micah Everett, an Associate Professor of Music at the University of Mississippi. In the article, Micah mentions that spraying water is really only appropriate if you use an “old-school” slide cream. In that case, Micah says to coat the slide with the cream before doing the following:

Finally, spray with a fairly generous amount of water—the water will “bead up” and provide the actual lubricating function.

Again, my intuition seems to be on the money. Of course, I could just be letting confirmation bias lead me around the internet, but I think this many references to beading up is a good sign that we’re on to something.

Finally, I found a note on a Slide-O-Mix FAQ which mentioned the following:

Our trombone lubricant produces an optimal surface on which the slide can glide without stopping or sticking. In any case, water is always necessary because our preparation takes advantage of water’s gliding properties. The other reason is that, during extended playing, the gliding film wears out and can be “freshened up” with a touch of water.

Apparently, they claim water has a gliding property which I think aligns nicely with my working theory. Of course, they also mention that water can “activate” or “freshen up” their lubrication as it ages which we’ve heard before. Perhaps, it’s a bit of both!

Well, if you found your way here because you also wanted to know why musicians spray their slides with water, now you know that water beading is probably the culprit. Of course, if you actually know the history behind why we spray our slides or can confirm the science on it, let me know! I’d love to learn more.

With all that said, I think this article segues right into my list of the top 3 slide lubricants. Spoiler alert: two of the products are creams! In meantime, remember to respect the brass!