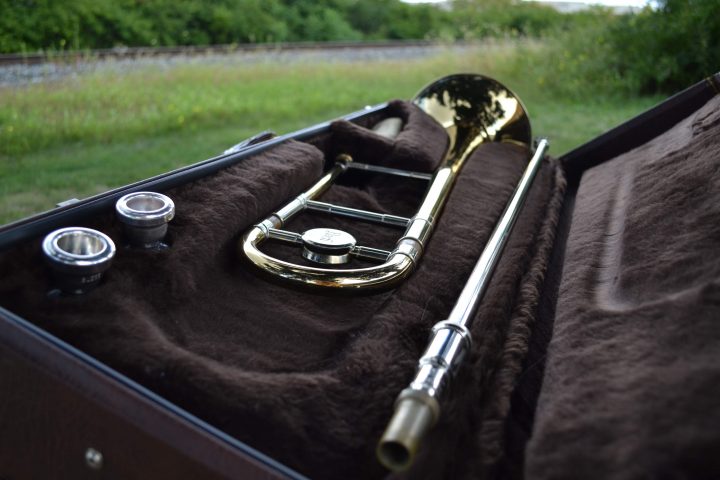 Were you ever curious about how a trombone actually works? Well in this article, we’ll take a look at the anatomy of a trombone. In particular, we’ll be looking at three different sections of the trombone: the slide, the mouthpiece, and the bell.

At a high level, there’s a lot to talk about in terms of trombone anatomy. For example, outside of the slide, the mouthpiece, and the bell, there are also small components like the water key, the slide bumper, and the tuning slide. In total, there are at least 15 unique elements in the anatomy of a trombone.

Of course, if you’re looking for more information, feel free to browse the rest of the article.

In general, the trombone is made up of three main sections:

If you’ve ever put together a trombone, these are the three main pieces you have to regularly assemble and disassemble.

Of course, these aren’t the only moving parts on a trombone. For example, the slide is actually made up of an inner and an outer slide. In addition, it features other moving parts like the slide lock and the spit valve.

In the following sections, I’ll break down the three main components into exactly what they are, what they do, and what makes them up.

On a trombone, the mouthpiece is the cup-like object that you buzz into. Unlike the slide and the bell, there’s really nothing too special about the mouthpiece—it’s just a chunk of metal or plastic.

However, there’s a lot of thought that goes into a mouthpiece. In fact, I could probably write a whole other article on the anatomy of the mouthpiece.

For starters, there a few main sections of the mouthpiece worth knowing about:

As you can probably tell from the name, the rim is the circular ridge that you place your lips against. Naturally, the shape of the rim (i.e. flat vs. curved) has consequences. For example, a flat rim is usually easier to play on, but you don’t have as much flexibility in terms of tone.

Meanwhile, the cup is the open space just beyond the rim. As you can imagine, the depth of the cup affects tone color and dynamic range. In addition, cup depth plays a role in player control and stamina.

Just beyond the cup, you’ll find the throat. In essence, the throat is a hole that regulates back pressure and tone quality. Again, these factors are also related to the player’s control and stamina.

Finally, we have the backbore which is the shank part of the mouthpiece that gets wedged in the slide. In addition to providing some way to fix the mouthpiece to the horn, the backbore is also responsible for directing air into the horn. As a result, its design can affect tone quality and dynamic range. All that said, it’s less important than the cup and the rim.

Of course, when you actually buy one, you’ll want to be familiar with the various brands and their part numbers (i.e. 12C, 5AL, etc.).

As mentioned already, the slide is the section of the trombone that connects the mouthpiece to the bell. Naturally, I felt it made sense to talk about it next!

As you can see in the image above, the trombone slide has a handful of features. For example, it’s composed of a set of nesting tubes. In other words, there’s an inner slide and an outer slide.

Of course, metal generally shouldn’t touch, so to keep things in good shape, we usually lubricate the inner slide. If you’re in the market for a new slide lubricant, check out my list of the top three slide lubricants. Of course, if you want a quick recommendation, I’d grab Slide-O-Mix then follow my directions here.

When the two slide braces meet, there’s a slide lock which we can use to hold the inner and outer slide together. As you can probably imagine, the slide lock is a small ring that rotates into place.

On the other end of the slide, you’ll find the water key or spit valve which is used to release fluid from the slide during play. At a basic level, the spit valve is composed of a lever, a cork pad, and a spring. As a result, the spring holds the lever and the pad in place to keep any air from escaping.

That said, if you’ve ever seen any pictures of my slide, you’ll see all kinds of dents in it. After all, I’ve been in many ensembles with more chairs than space, so I’ve hit a few chair legs in my day.

Moving along, you’ll notice two more braces. These are called bell braces and they connect the bell to the slide receiver. In addition, they provide structure for the tuning slide—which provides airflow from the slide to the bell.

In addition, the tuning slide allows the player to adjust their tuning. If you’ve never played around with your tuning slide, I recommend doing so as soon as possible. Unfortunately, tuning slides are one of the more neglected features of a trombone, so it’s possible that yours is stuck right now. If so, you should get it to the shop.

Regardless, it’s always a good idea to give it a proper cleaning and lubricating. If you’re curious about how to do that, I’ve written a guide to greasing a tuning slide.

One last thing I’d like to mention is that the bell is often the most customizable piece of the trombone. For example, many professionals have triggers which tap into the tubing on the bell. As a result, they’re able to extend the range of their horn while also giving them more options for slide positions. For instance, it’s common to skip C in sixth position and use an F trigger at first position.

Overall, there are three main sections of the trombone: the slide, the bell, and the mouthpiece. In addition, each section can be broken down into different features. For example, the bell features a tuning slide and multiple bell braces. All that said, there are many different makes and models of trombones, so some features may not have made the list.

As always, I hope you liked this article. If so, make sure to give it a share. Otherwise, I appreciate your feedback. After all, there may be some topics you think I missed in this article. At any, don’t forget to respect the brass!